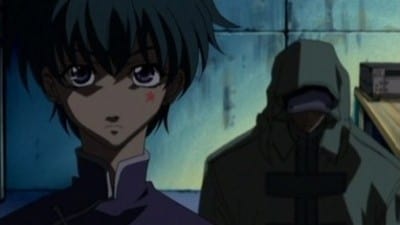 Get Back the Phantom Sunflowers! (Part One)

Hachisu, an art dealer, and Abukawa, the museum curator, ask the GetBackers to from a peculiar thirteen painting of Sunflowers by Van Gogh. Ban and Ginji decide to accept the case, and later in the evening, Ban and Ginji set out to surveil the whereabouts of Clayman. Working for Clayman, Himiko starts leading the GetBackers to Clayman, using people who take her appearance. Himiko and Clayman grin at the situation, as the GetBackers follow closely behind them. Ban gets sprayed by Himiko’s poisonous perfume, being controlled like a puppet. He chokes Ginji with his grip, but suggests Ginji to use his lightning to break free of the control. Himiko and Clayman take Ban and Ginji to their hideout, having them tied up. They easily break free Clayman reveals the thirteen painting of Sunflowers to Ban and Ginji, questioning whether they think it is a fake or not.