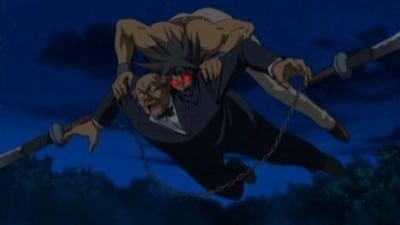 Ginji electrifies himself, shocking Hishiki until leaving him unconscious. Ginji apologizes to Ban for causing Shido to attack the group, as he blames himself for abandoning Shido. As Ban and Ginji try to find Shido, Hevn and Madoka help out as well. Ginji tries to help Shido who asks him to fight alone. After defeating Kurobe, Shibo discreetly commands Mozart to steal the Stradivarius violin and return it to the estate. Madoka, in turn, says that she will allow herself to play a regular violin during her performance in the evening. Later on, Shido returns the Stradivarius to Madoka. In return, Madoka offers to perform for Shido in the streets in the afternoon, attracting Visconti, Madoka’s violin teacher. Visconti later compliments her performance with the others, jokingly noticing that Madoka is in love with Shido. Later in the evening, before a performance, Ban uses the Evil Eye on Akutsu, thereby ruining the performance. The next day, Shido hangs out with Madoka in her backyard as both start getting closer.