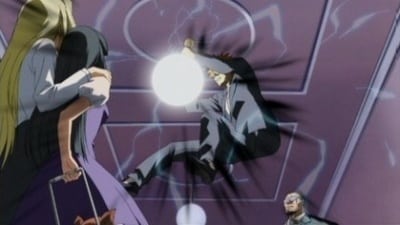 The Animal Transformation of the Beast Master

Just when Ban attempts to kill Shido with his grip, Kazuki arrives to aid Shido. Ban escapes as Ginji, Hevn, and Madoka go encounter a Protector, named Ryuudou Hishiki. Ginji then creates a power outage in the estate. Ban runs into Paul and Natsumi, and Ginji, Hevn, and Madoka finds Akutsu and the Stradivarius. Akutsu gives her back the Stradivarius, but after they leave, Akutsu commands Kazuma Kurobe, one of his men, to bury Madoka with her violin at the estate. Ginji’s group meet up with Ban’s group, and escape from the estate, and Sugahara, Madoka’s guardian, arrives just in time. He drops off Ban and Ginji on the highway, revealing himself to be Tsujima Kurobe, the younger brother of Kazuma Kurobe. Back at the estate, Kurobe tells Shido of his plans to kill Madoka, and the two engage in battle. Meanwhile, Sugahara tries to kill Madoka, but he realizes he was trapped in Ban’s Evil Eye, having realized he was traitor, and having faked a third Evil Eye on Shido. Then Kurobe returns to face Shido off again, only to witness the animal transformation of Shido head-on. Hishiki returns as well to face Ginji off again. Ban and Sugahara battle it out as well, which ends up as a defeat for Sugahara.