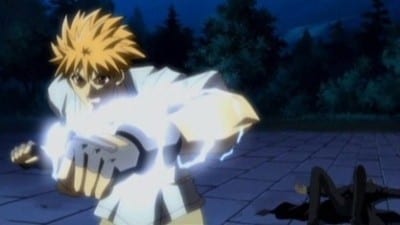 Death Match at Sunrise: The Lightning Emperor vs. Doctor Jackal

The Transporters face off with The GetBackers in an abandoned shrine. Ginji and Akabane battle while Himiko and Ban fight. Ban surprises Himiko with his grip, defeating her, before he almost tells her of Yamato’s death. Akabane presents the extent of his glowing knives, however Ginji manipulates them with magnetic electricity, defeating him. Ban and Ginji leave the shrine to resume their retrieval. The next morning, Himiko wants to find the GetBackers, but Akabane claims that he has had more than enough fun with them for the time being. As Akabane leaves the shrine on his own, Himiko and driver Maguruma find The GetBackers. As Maguruma prepares to ram The GetBackers head-on, Ban uses Evil Eye on a nearby crow, causing it to dream of many crows attacking the semi-trailer truck, which then results in Maguruma crashing into a pole. They then find out from Ohtaki that inside the box has nothing but a “platinum” watermelon, as they receive one tenth of the watermelon as their reward.