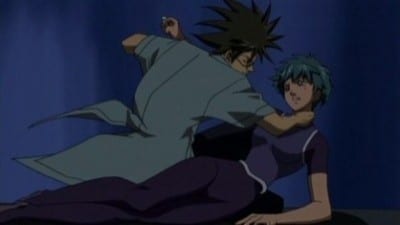 As the GetBackers prepare to battle The Transporters, Ginji plans to fight Akabane, while Ban plans to retrieve the box. Not long after, the GetBackers are in a bind when Akabane attempts to slice Ginji apart. Ban surrenders and Ginji is captured by the Transporters. In the semi-trailer truck, Ginji and Himiko converse about Ban. Himiko reminisces about her time with Ban and her older brother, Yamato, as a former recovery service. However, Himiko regrets having ever met Ban, since he was responsible for Yamato’s death, but Ginji states he believes in Ban. Ban catches up with The Transporters to rescue Ginji. Using the Evil Eye, Ban rescues Ginji and retrieves the box. The Transporters then plan out their next attack on GetBackers with Himiko explaining to Akabane that the Evil Eye can only be used three times on a person in a single day, and that he can’t do it again on the same person.