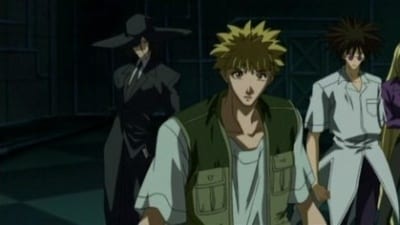 Get Back the Limitless Future!

With the intruder interception program active, none of GetBackers there can stop Makubex. Makubex says that he was aware why Ginji left the Limitless Fortress in the first place. He mentions that he hacked into the Babylon City database and found an information storehouse called the Archive, a prophecy foretelling the future of the Limitless Fortress. Makubex wanted the IL to serve as a way to break the bonds from Babylon City, and to create a “new” Limitless Fortress. As the team try to stop him, Makubex finds himself in an illusive world. Mabukex witnesses the result of his profound utopia, as well as the absence of The VOLTS. He then sees a reflection of himself announcing he will the return of the world to nothingness and detonating the IL, consequently resulting in the ruins of the Limitless Fortress, as Makubex turns into ashes. However, Ban reveals using Jagan on Makubex. Ban destroys the detonator, and Makubex evades the team, locking them in the computer system room. Ginji uses his lightning to break open the door. As he leaves, Emishi tells him that Makubex turned into a hardhearted person for the sake of The VOLTS disbanded. Makubex attempts to commit suicide, to find out whether he himself is real or fake. As he falls, Ginji breaks through a window, and saves him. Ginji tells Makubex that his death would surely affect those around him, saying that there are many who love and cherish him. Makubex cries tears of joy as he reunites with everyone, changing him back to his warmhearted self. He vows to protect those he loves and to see the error of his ways, announcing the new formation of The VOLTS. He gives the IL, mentioned as a file stored in a floppy disk, back to The GetBackers. The GetBackers return the IL to the masked men, who are killed by Akabane when they try to kill them. The team part ways, and Ban and Ginji return to the Honky Tonk cafe.