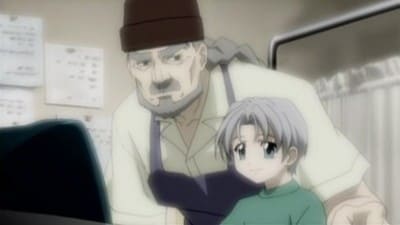 The Final Fight! Ginji vs. Makubex

Ginji pleads with Makubex to give back the IL to the GetBackers, but to no avail. After confrontation with Makubex fails, Ginji volunteering to fight him face-to-face. Ginji attempts to attack him head-on, but Makubex deflects his attack, electrocuting the other six. Then Makubex “transforms” the room into the inside of his body, which appears to be an illusion. He proves the illusion as reality, which confuses them. Ginji deducts that Makubex is suffering, and then asks him to fight in order to help him. As Ginji and Makubex continue their battle, the others realize that these two are evenly matched in strength and ability. Ban wonders if the Limitless Fortress is in itself a virtual reality, as they have witnessed injuries healing rapidly and strength increasing immensely. Through a flashback, it is revealed that Ban suggested Ginji to join up with him, due to Ginji uncertainty of remaining with the VOLTS due to his growth in powers as the Lightning Lord. As Ginji delivers the final blow toward Makubex, it seems that Makubex and the inside of his body was all just an illusion, as he used this illusion to buy time in order to install the IL completely into the mainframe of the computer system.