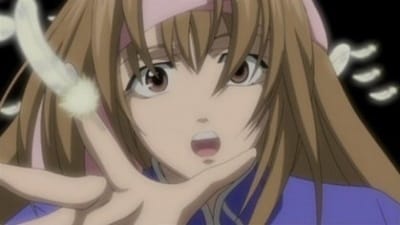 Fudou attacks Ban head-on, but Shido manages to come just in time to save him. All of a sudden, multiple clones of Fudou appear out of nowhere in front of Shido, and multiple clones of Akabane appear out of nowhere in front of Ginji and Akabane. As the Fudou clones begin to attack, Kazuki and Emishi step in, as they figure out that the intruder interception programs creates clones based on collected data. As Akabane fights off the Akabane clones, Ginji meets up with Ban and Hevn, and the four of them proceed to stop Makubex. Sakura wakes up only to find herself in the pharmacy. Himiko tells her that she was the one who brought her there. Juubei, blinded by his black needles, tells Sakura that Makubex made a mistake in his calculations. Sakura tells Gen that Makubex obtained his data by hacking into the mainframe of Babylon City, as well as for the virtual reality technology. Gen reveals that he was the one who raised Makubex. Juubei wants to leave with Sakura to help stop Makubex, while Himiko tags along as well. Meanwhile, after Shido, Kazuki, and Emishi finish off the Fudou clones, clones of themselves appear. Elsewhere, Ban, Ginji, Akabane, and Hevn encounter Kagami. Shido, Kazuki, and Emishi manages to catch up with the other four. Kagami lets the seven of them pass to see Makubex, who happens to be expecting them.