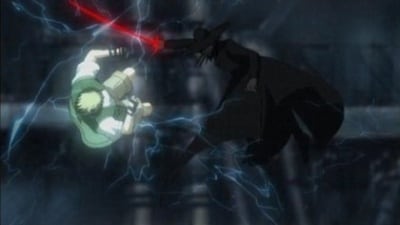 Awakening! The Advent of the Lightning Emperor

It is revealed that Teshimine was an illusion to Ginji, as the real Teshimine is still in the Honky Tonk cafe. Ginji finds Sakura, and then injures her with his lightning. As Akabane enters, Ginji is caught off guard. As Ginji uses his lightning to attack, Akabane evades each attack with his supersonic speed. A power outage occurs in Lower Town, and Kazuki and Emishi are forced to leave Gen and Ren in the pharmacy. As the two participate in hand-to-hand combat, Ban steps in, disrupting the battle and seeming has been killed. However, Ban tells he used the Evil Eye on Ginji to fake his death, surprising Ginji and changing him back to normal. At the Honky Tonk cafe, Teshimine prepares to leave, with Paul and Natsumi asking him to come back anytime. Makubex attempts to install the IL, but the computer system has been jammed by Gen’s doing. Gen reveals to Ren that he was responsible for teaching Makubex the basics of computer programming, as he was able to learn very quickly. Makubex download an intruder interception program to supposedly attempt to reinstall the IL without fail. Nonetheless, this will slow down his operation. Akabane admits that he transported the box of plutonium to Makubex, making Ban and Ginji feel betrayed. As Akabane takes Ginji with him to recover the IL, it is revealed Ban faked his Evil Eye and encounters a seemingly revived Fudou.