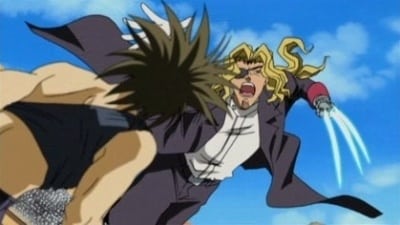 Blades of Revenge • Ban vs. Fudou

Fudou says that he wants Ban to feels limitless pain and suffering as a way to avenge the loss of his real arm. The battlefield where hey will be face off is in the Roman Coliseum. As Gen and the others witness this battle, Kazuki comes in the pharmacy carrying Juubei. Ginji finds himself in the ruins of the Limitless Fortress and sees Shuu, who was supposedly killed before. Suddenly, all the children turn into zombies, frightening Ginji to the point of killing them. Then he encounters Takeru Teshimine, the informant who visited the Honky Tonk cafe. Teshimine recalls to when Ginji first made friends when he was younger, seemingly abandoning Teshimine. He then says that Ginji witnessed all his friends be slaughtered, blaming Ginji for this. A enraged Ginji begins transforming into the Lightning Emperor once more. Teshimine reminisces to when Ginji first transformed into the Lightning Emperor, and then he admits that he wanted to raise Ginji to gain his immense power to rule over the Limitless Fortress. Teshimine causes Ginji to unleash huge amounts of lightning, affecting the Limitless Fortress entirely. At the pharmacy, Shido prepares to depart with Hevn in order to stop Ginji’s reckless behavior. Fudou seems to have gained the upper hand, as Ban is losing his strength and speed. Ginji’s lightning causes the illusion of the Roman Coliseum to disappear. As Ban yet again recites an incantation, he uses his grip to destroy Fudou’s metallic arm, attempting to find and stop Ginji.