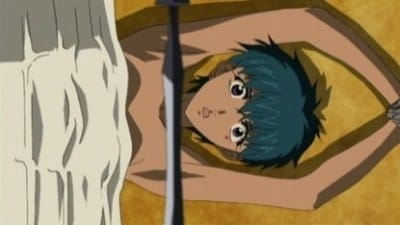 The Man From Babylon City

Akabane reveals his transporting assignment to give Makubex a box of plutonium. And he then says that he still has a recovery assignment to retrieve the IL, keeping the promise to both clients. Watching from the pharmacy, Hevn and Shido see that Himiko is up against Kagami, having faith in her victory. It is then seen that Himiko and Kagami will fight in the Mayan Temple as their battlefield. As he reveals himself, he outsmarts her with his mirror fragments, to gain the upper hand. The sacrificial ritual begins, as Himiko lies at the altar of the temple. Suddenly, Himiko and Kagami switch places, causing him to be “sacrificed”. However, Ban reveals himself, as he has used Evil Eye on Kagami before Himiko was sacrificed. Himiko and Kagami resume their battle, as Ban watches. Himiko uses her poisonous perfume to increase her speed, catching Kagami off guard. Ban joins in the fight and the two use their supersonic speed to attack Kagami. Kagami later retreats as the objective is to protect the IL. Himiko becomes exhausted from using the poisonous perfume, as it begins to drain her energy. Ban helps her recover, then leaves her in the virtual reality room. Ban goes to another virtual reality room to face off against Fudou.