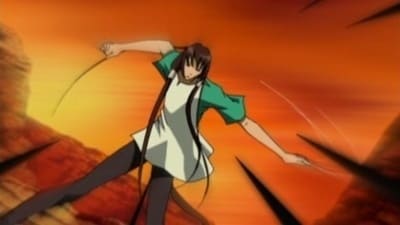 Oh, My Friend... Kazuki vs. Juubei

At the Honky Tonk cafe, an informant asks about the whereabouts of Ginji. Paul and Natsumi says that he is with the GetBackers in the Limitless Fortress. Meanwhile at the Grand Canyon, Juubei presents the black needles, which is a forbidden technique. Kazuki get stung by them, and then he figures out that the black needles are magnetic, controlled by a black ore stone. However, using the black needle will gradually drain the energy of Juubei. Juubei attacks at full force, but Kazuki manages to defend, causing a whirlwind of threads and needles. In a flashblack, it shows when Juubei first met Kazuki as the former’s clan has been protecting the latter’s. After the West Fuchouin-School was burned down, Kazuki and Juubei were told to go to the Limitless Fortress to live. Juubei remembered that Makubex believes that everything that is happening in the Limitless Fortress is caused by the people of Babylon City. Hevn and Shido arrive at the pharmacy, noticing that Gen is witnessing the battles. Kazuki and Juubei continue their fight, white threads against black needles. Juubei is caught is one of Kazuki attacks, urging him to give up. He then stabs himself using the black needles, causing Kazuki to wail. Kazuki carries Juubei out of the virtual reality room.