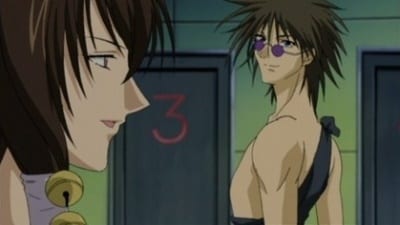 As Makubex plans out the next move, Fudou becomes impatient with him, longing to have another battle with Ban; kazuki, Himiko, and Hevn face children under the wire doll system. Reluctantly, Ginji and Akabane are able to stop the children. The five of them come a circular room, where Ban and Shido also arrive calming Fudou. Once they reunite, it is revealed that Gen and Ren witness the room where the seven of them are in. It is also revealed that Gen is the architect of Babylon City. In the circular room, there are six numbered doors. Ginji finds a die and gives the idea that everyone, except Hevn, take turns rolling the die, and each person would go to their numbered doors, based on the number rolled. Akabane faces off against Makubex. Meanwhile, it first appears that Kazuki and Emishi are to battle, but Shido and Juubei come to their respective support.