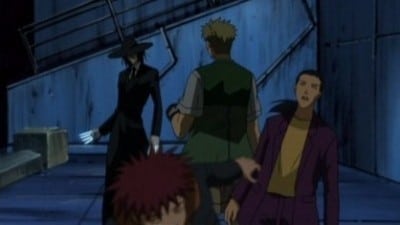 Ginji and Akabane battle against several men, but Ginji disagrees with Akabane ruthless attacks. Kagami sets out to look for Ginji and Akabane, while Juubei follows him. Makubex reveals how the Limitless Fortress is divided into three sections: Lower Town, The Beltline, and Babylon City. His objective therefore is to obtain absolute power from Lower Town. Juubei and Kagami encounter Ginji and Akabane, but Ginji is enraged when Juubei tells him he killed Kazuki. Ginji unleashes a huge amount of lightning, which both exhausts them as well as separates them. Akabane and Kagami also engage in battle, with Akabane forcing Kagami to escape. Juubei raises doubts about Makubex, but Kagami advises him to continue the path he chose. Ban and Shido manage to find the garbage disposal facility. Meanwhile, as Hevn and Himiko are harassed by two men, Kazuki saves them.