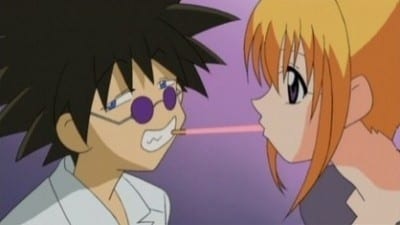 The Loulan Dance Whip That Whirls in the Night

Emishi takes Ban and Shido to his safe house where Ban gets acquainted with many girls residing there. Later, Emishi attacks Shido with his Loulan Death Whip, making him unconscious. Inside, Emishi undoubtedly uses his whip to attack Ban, but Emishi hallucinates. Ban reveals to Shido that he used Evil Eye right when Emishi first appeared, realizing he was a soldier from Makubex due to Fudou’s sudden escape. Afterward, Ban and Emishi engage in battle, as Shido join in as well, but Emishi then escape. Ban and Shido, as well as Kazuki, Gen, and Ren find out that the IL is an implosion lens, used as an atomic bomb. Ban and Shido unwillingly fights off more men controlled by the wire doll system. As Kazuki departs from the pharmacy, it is revealed that Gen is working for Makubex as well. Meanwhile, Ginji tries to escape from Akabane, but is he caught up, Akabane finds out that the IL is located in the garbage disposal facility.