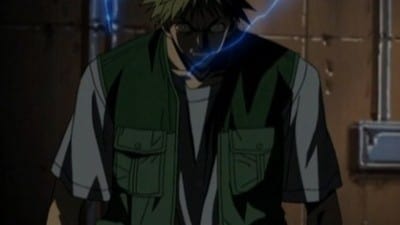 Ginji sees an image of himself when he was younger, and goes berserk when Akabane kills it. Akabane then sees multiple copies of Ginji, later revealed as projections, and he easily defeats them, as the real one calms down. Ren Radou, a pharmacist, takes Kazuki to a pharmacy. Gen Radou, Ren’s grandfather, also checks up on Kazuki. As Kazuki leaves the pharmacy, Gen tells him that Makubex wants to live in a world of suspicion, where people will fear betrayal. Hevn and Himiko are imprisoned in chains in a jail cell. Two men, jeering at them, walk in to harass them. Himiko sprays poisonous perfume, to control the minds of the two men, telling them to unshackle the chains. Hevn and Himiko look for the rest of the team. Kazuki, Gen, Ren try to figure out where Makubex is hidden. Smelling Himiko’s perfume, Ban deducts that Makubex and supposedly the IL are in the garbage disposal facility. Once they’ve figure that out, they are attacked by several men, controlled by Makubex’s wire doll system. Fudou shows up and engages Ban in battle, seeking to kill him. Haruki Emishi, a former member of The VOLTS, makes a surprise entrance, which results in Fudou escaping.