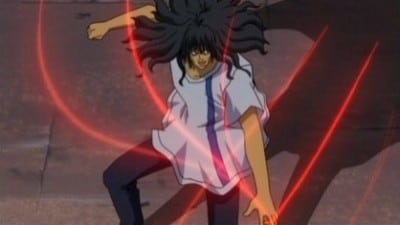 As Makubex spyes the recovery team with cameras, Himiko and Kazuki are fighting off several men. Kazuki reveals himself to Himiko to be the traitor in the team, as he wraps her up in threads. However, the real Kazuki shows up to announce that the other “Kazuki” is an impostor. The impostor removes his mask, revealing himself to be Kogenta Akame, a student of the West Fuchouin-School. Kazuki and Akame then engage in a thread technique battle. Kazuki defeats Akame and saves Himiko. However, Himiko becomes unknowingly controlled by Makubex, by a wire from his computer to Himiko’s body. As Kazuki figures this out, he attempts to cut the wire, but is stopped by Juubei Kakei, an assistant of Makubex, who throws him needles. Juubei chases him, but Kazuki causes an explosion and escapes. Makubex commands Juubei to bring Himiko, now unconscious, to him. Makubex then plans out his next move, as Takuma Fudou brings him the kidnapped Hevn, which he might use her as a hostage.