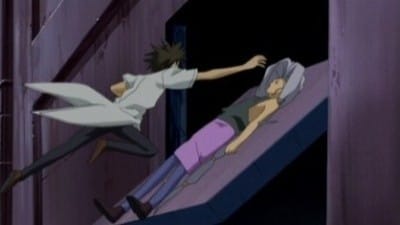 Akabane waits for Ginji to wake up after being unconscious from the effects of Horii’s poisonous gas. Akabane tells Ginji that the rest of the team went out to search for the IL, which upsets Ginji. Meanwhile, Ban and Shido are in another route in the Limitless Fortress, as Ryouma Magami and Ayame Magami, two former members of The VOLTS, show up to face off against them. Ban and Shido notice that Ryouma and Ayame modify their body as their weapon source. Ayame leads Ban into a trap door. The lights are turned on to revealed that the basement is really an abandoned laboratory. He reveals that he has imprisoned innocent women, who he plans to modify as well. Ban chants an incantation, increase his strength and gripping power, releasing himself from the trap. He then goes berserk on Ayame, destroying his modified body. He frees the women and finds a way out from the laboratory. Meanwhile, Shido defeats Ryouma. Ban meets up with Shido, frustrated to know about body modification on innocent people. After discussing, Ban and Shido believe that Makubex, the youngest Four King who was born in the Fortress, is responsible.