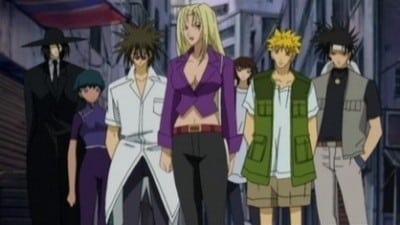 Hevn hires Ban, Ginji, Shido, Kazuki, Akabane, and Himiko to work as a team. They are brought to an abandoned building near the Limitless Fortress, a place familiar to Ginji, Shido, and Kazuki. As they enter, Hevn then introduces the team to a group of masked men in suits. The leader of the masked men informs the team to retrieve something from inside the Limitless Fortress, dubbed the name IL. The building then suddenly self-destructs, as the team departs. They decide to begin the assignment the next day. In the morning, the team heads to the Limitless Fortress. The team part ways with Hevn, but she is soon kidnapped. Meanwhile, the team fights off more modified men, and they then get acquainted with Shuu, a former member of The VOLTS. Kumon Horii then instantly kills Shuu, and sprays a poisonous gas around the team. This causes Ginji to be enraged, however becomes affected by the poisonous gas. As Horii attempts to kill Ginji, Akabane steps in and kills Horii instead.