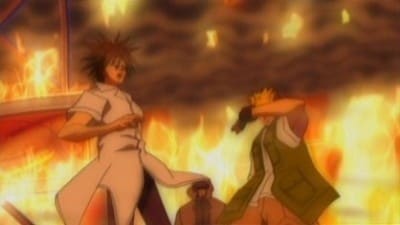 Get Back the Phantom Sunflowers! (Part Two)

The GetBackers are taken to Clayman’s art gallery, displaying many masterpieces. Clayman offers to be a “replacement” client for The GetBackers, since Ban and Ginji were in awe of all the masterpieces displayed. Clayman explains that she became an art thief to protect the masterpieces from the so-called “con artists”. Hachisu and the SWAT team make a sudden appearance, as Hachisu notes that he used The GetBackers to locate Clayman’s art gallery. He further admits that the thirteenth painting of Sunflowers was indeed a fake. Ban uses his Evil Eye on Hachisu, causing him to dream of unexpectedly burning all the paintings to ashes. Hachisu and Abukawa attend a business meeting the next day. Ban and Ginji arrive and recover the thirteenth painting of Sunflowers, confusing Hachisu. It has been revealed that Clayman, identified as a woman, used clay to disguise herself as Abukawa to return all the paintings, but is caught. After Ban and Ginji did the favor as to help return the paintings to Clayman’s art gallery, she explains that all her masterpieces were painted after the death of the famous artists including Van Gogh. As Ban and Ginji arrive at the Honky Tonk cafe, Kazuki explains them that Clayman’s mother is a renowned medium, and that she used her body to paint the masterpieces, which are displayed in Clayman’s art gallery.