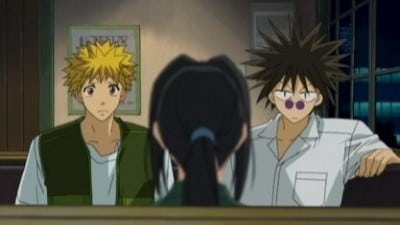 The Initials are G & B

A schoolgirl named Natsumi Mizuki loses a kitty key chain from her mother when a cop thinks she took a picture of him giving information to the yakuza henchmen. Paul Wan, owner of the Honky Tonk cafe and friends of the GetBackers, lectures Ban and Ginji to accept the case. After many failed plans, The GetBackers finally retrieve the stolen object, but Natsumi has been captured by the cop and yakuza henchmen. The GetBackers rush to the scene, Ginji summons lightning from his body, resembling that of an electric eel. Afterward, Ban whips out a two hundred kilogram-force grip. An illusion from Ban’s Evil Eye causes the cop to dream of killing both Ban and Ginji, and then being shot to death by policemen. After the Evil Eye ends, Natsumi is given back her key chain. Later, Natsumi obtains a part time job at the Honky Tonk cafe where The GetBackers usually hang out.